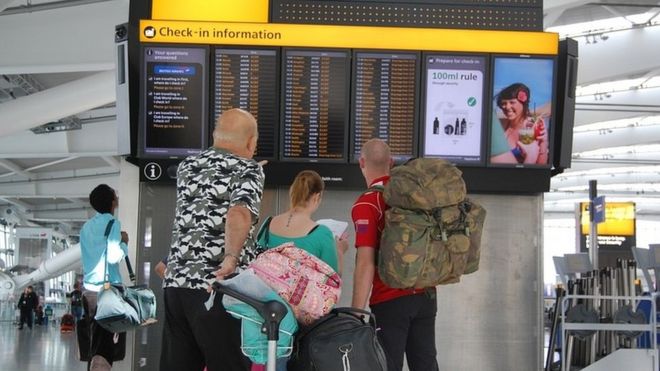 Global airport security is again under the spotlight following the attacks in Brussels. Is it ever possible to prevent a suicide bomber entering an airport to kill and maim?

In 2003, the British government ordered the military to use tanks to protect London’s Heathrow Airport, after receiving what it claimed was a credible and “chilling” threat against airport passengers.

Three years later, a ban on liquids in the air was introduced, resulting in long queues, and forcing airports to redesign their security procedures.

The rule remains in place, disrupting the positive experience of air travel for passengers.

Increasing security always has an impact and as the maxim goes, if we have to change our lives, the terrorists have won.

As a result, secure air travel is always a compromise.

Airports are generally designed around a clear security “line” – the central check-point where passengers’ documentation is checked, they are scanned for concealed items and sometimes swabbed for explosives.

They then pass into the “airside” area – in effect a security bubble.

This protects the aircraft as much as the airport. The Brussels bombs were detonated outside the bubble, in the terminal before the security check.

Passengers will wonder why there are no security scanners at the door of the airport, or the entrance to the car park.

Should we move the line of security?

The problem is that this simply moves the place where the queue forms. And queues are the ideal soft target for a terrorist.

Security expert Philip Baum, author of Violence in the Skies: A History of Aircraft Hijacking and Bombing, even suggests moving the line the other way – to the departure gate where passengers board the plane.

This could be more expensive, since the security would no longer be centrally organised.

But it would allow security teams to pay greater attention to where people are flying to, enabling them to concentrate on destinations and passengers that pose a higher security risk.

This is called profiling, and some experts swear by it.

Ben Gurion airport in Tel Aviv, often cited as the world’s most secure, relies on profiling. Passengers are closely watched and intensively questioned about who they are and where they are going.

It works because it allows a more fluid and less predictable line of security.

But it is a technique often criticised as “politically incorrect” because those without white faces, travelling to and from “non-western” countries, face more scrutiny.

Passengers complain of being forced to answer personal questions or even hand over personal items deemed to pose a risk. It can be highly intrusive.

That is a particular concern in European countries – though British airports do carry out low-level behavioural analysis of passengers.

Philip Baum says we should “get over” our reservations, but he also argues that security staff could simply be more watchful.

A terrorist with a Kalashnikov gun should not be allowed to get far into an airport terminal, he points out. He would also like to see more use of explosive-sniffing dogs.

The UK government stresses the importance of good intelligence so that the security can be increased when there’s a threat, as it has been in the wake of the Brussels attacks.

It can then be scaled back as the risk diminishes.

Because it is impossible to fully protect air travellers. And even if it was, there are plenty of other places where crowds gather, which could be targeted instead.