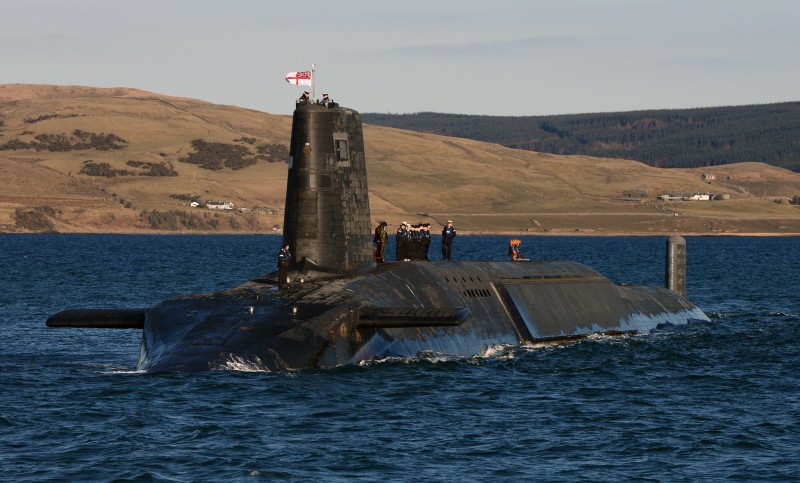 Corbyn: UK could keep Trident submarines but without warheads

Jeremy Corbyn has suggested the UK could keep its Trident submarine fleet but without carrying nuclear warheads.

The Labour leader told the Andrew Marr show that protecting defence jobs was his “first priority” and there were “options” for doing this while taking a lead in global nuclear “de-escalation”.

Labour, which is split over the issue of renewing Trident, has said the idea is similar to one adopted by Japan.

Mr Corbyn is at odds with many of his MPs over the future of the UK nuclear weapons system – which the government has estimated will cost £31bn to renew – and has commissioned a review led by shadow defence secretary Emily Thornberry to look at its future, likely to report in the summer.

The Labour leader has been a longstanding opponent of Trident but some MPs and peers have threatened to resign if Labour reverses its decades-long support for the nuclear deterrent.

Parliament is to hold a vote later this year on whether to proceed with building successor submarines to the existing Vanguard fleet, which is due to become obsolete by the end of the next decade.

Set aside the technicalities; Labour’s Trident debate will be a test of political strength.

Ordering new submarines without nuclear weapons could make for a long term compromise, between Jeremy Corbyn and the unions at least.

But – as he makes clear – his views on those weapons aren’t changing. Neither are those of his critics.

And – crucially – Parliament will make the main decision on Trident long before the end of Labour’s policy review and its party conference.

So the leader, chief whip and shadow cabinet will have to decide whether or not to order Labour MPs to oppose the government.

All the while, ministers are confident of winning the Trident vote, whatever the opposition does.

And some Conservatives who think opposing nuclear weapons makes the opposition look weak are keen on a vote before the May elections.

Unite leader Len McCluskey has urged Mr Corbyn to give MPs a free vote on the issue, as happened over military action in Syria.

Mr Corbyn told the BBC that Trident was a relic from a “Cold War generation” and he did not believe David Cameron would ever contemplate using it.

Asked, in that case, what was the point of having at least one submarine on constant patrol, he said: “They don’t have to have warheads on them.”

He added: “If anyone uses a nuclear weapon it is catastrophic for the whole globe… There are options there.”

What is Trident for?

Since 1969, according to government documents, a British submarine carrying nuclear weapons has always been on patrol, gliding silently beneath the waves, somewhere in the world’s oceans.

The logic is to deter a nuclear attack on the UK because, even if the nation’s conventional defence capabilities were destroyed, the silent submarine would still be able to launch a catastrophic retaliatory strike on the aggressor, a concept known as mutually assured destruction.

The submarines carry up to 16 Trident missiles; each can be fitted with a number of warheads, which can be directed at up to 12 different targets.

Read more about the history of the UK’s nuclear deterrent

Union leaders have warned that scrapping Trident could devastate communities reliant on the defence industry and Mr Corbyn said he recognised the need to retain “amazing skills and technology”.

Scottish First Minister Nicola Sturgeon, who backs the abolition of Trident, told a Unite conference in Clydebank that any decision to do so “must be matched by a programme of diversification and alternative employment”.

Ms Thornberry said the idea of submarines equipped with conventional warheads, but with the potential to have a nuclear capability, was a posture adopted by Japan.

She told Sunday Politics that it was “certainly one option that is available to us and one thing that needs to be looked at”.

But John Woodcock, the MP for Barrow in Furness – where the Vanguard fleet was built – said the idea was “implausible”, adding: “Having a deterrent that has no capacity to deter is like having an army with broken rifles and no ammunition.”

However, former minister and senior backbencher Keith Vaz said he had changed his mind on Trident.

“I think Jeremy Corbyn has persuaded me. He has made it very clear when he is prime minister that he is not going to be able to use these weapons, so what is the point in having them?” he told Russia Today.

Mr Corbyn, who outlined plans on Saturday to cap levels of executive pay and stop firms which don’t pay a living wage from paying dividends, rejected suggestions he was talking only to people who agreed with him.

He said he wanted to “reach out to everybody”, including Conservative voters.

He said he backed repealing legislation passed by the Thatcher government in the 1980s banning so-called secondary strike action, where unions walk out in sympathy with other workers already on strike.

Such action, he said, was “legal in other countries” and he asked whether he would legalise it, he replied, “Yes, of course.”

The Conservatives said Mr Corbyn’s pronouncements showed Labour were a threat to “the security of every working family”.

“Labour would weaken Britain’s defences by having a nuclear deterrent without any nuclear weapons, and would weaken our economy by changing the law to increase the number of disruptive strikes,” said Mr Fallon.