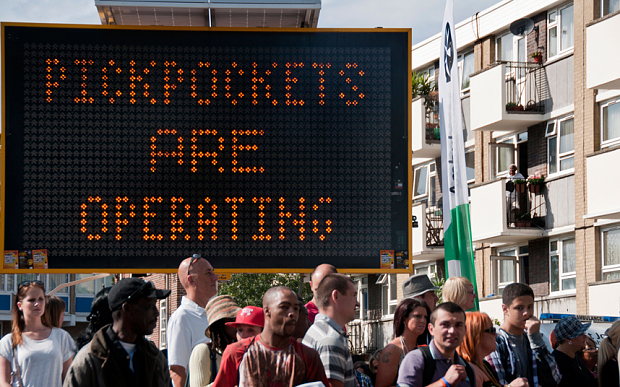 Gangs of criminals across Europe are investing in low-cost airline tickets to fly their members into Britain for fortnight “crime holidays”, an EU police chief has warned.

Europol, the EU’s crime-fighting agency, said the tactic was favoured by a new generation of mobile organised crime groups operating across Europe.

Mr Donald said crime lords handed crooks a flight ticket with the simple instruction to carry out as many crimes, such as house break-ins or pick-pocketing, as they could over a short period, before they returned home and were moved on to another country.

But organising a pan-European response to the scourge of organised crime remains the mainstay of the agency’s work.

He explained: “We have seen this phenomenon of mobile organised crime groups who are nationals of one country but operate across multiple countries.

“They just do volume crime – they steal wallets, cars, break into houses, you name it and then they are plucked out of the area they’re in and sent home, before they are shipped out to another country.

“There is a whole infrastructure behind them that takes the stolen property and moves it on so they are free to fly in and out and just do the crime.

“So you have a crime wave in one area, it lasts two weeks and then it’s gone.

“If the team that are doing it are from six or seven countries away from, say, the village you are in, what chance does the village cop have on his own?

“That is where we come in.”

“Most of our business is drugs and we recently had a case where the Slovaks had a team who they knew were going to import cocaine and it was going to come in from Spain on a boat but they had no more than that.

“Then you had the Lithuanians who knew they had a team who had left the country but had no real idea what they were going to do.

“And then you had the Spanish who had intelligence which said the people who usually receive drug loads were getting busy.

“But crucially the Brits had the name of the boat and intelligence that four Lithuanians were learning to sail yachts.

“We coordinated all of that here at the Europol offices, round the table and you just can’t do that without an agency like ours.”

Crime lords hand crooks flight tickets with the simple instruction to carry out as many crimes as possible Picture: Alamy

The 55-year-old started his police career in 1978 when his job was directing traffic in the Aberdeenshire village of Ellon.

But he rose through the ranks of the now defunct Grampian Police, where he was involved in dealing with the Peterhead Prison riots and the aftermath of the Piper Alpha disaster.

Donald then took on a string of national UK policing posts before joining Europol in 2007.

As well as drugs, the issue of illegal firearms is one which has dominated his time at Europol.

He explained: “It is a recurring theme in the conversations I have with police chiefs across Europe – that organised crime gangs, and terrorists, have access to military-grade hardware.

“Charlie Hebdo, Tunisia, the foiled plot in Verviers in Belguim – there have been so many recent examples of military-grade hardware, automatic weapons, assault weapons being used.

“I would highlight Charlie Hebdo in particular because all the evidence suggests, and I have not seen anything from a Europol perspective that contradicts this, the weapons were bought on the illicit market.

“This was not a great terrorist conspiracy. If you think back to the days of the IRA and the boat allegedly coming from Libya with weapons, it is not as sophisticated as that.

“It is a guy getting on a train to Brussels where he meets a guy and buys a gun. It makes it so much harder to police.”

Donald says cyber-crime is a huge issue but police forces are often tackling the issue with “one hand tied behind their backs”.

He says this is because the powers over “lawless” parts of the internet do not match what officers can do on the street.

He explained: “The world has changed so much, you no longer need to wait on a street corner for some guy to come along and buy your smack, you just go on the dark web and order it and it comes in vacuum pack bags which are difficult to trace by sniffer dogs.”

He continued: “Another issue is the situation in the Mediterranean with human trafficking.

“How do you deal with that because the organisers are not sitting in Sicily or mud huts in Africa. The guys making the money are sitting in London, Paris or Milan in very nice apartments making phone calls and buying boats.

“It needs a pan-European response.”