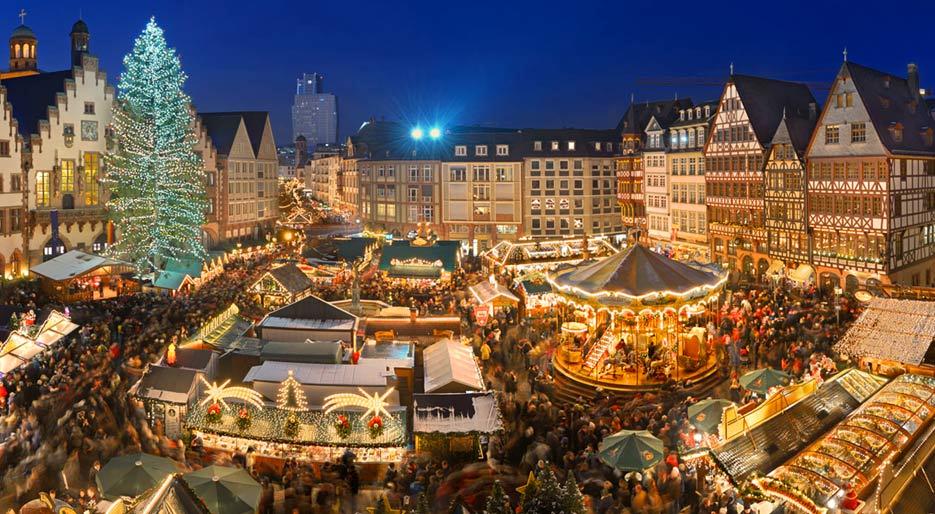 Concrete barriers have been erected at Birmingham‘s German Market to prevent suicide bombers as armed police patrol Newcastle amid fears of terror attacks.

The bollards were put up this week to safeguard the thousands who flock to the seasonal city centre attraction each day.

It is estimated that 5.5 million people will visit the market in Colmore Row and Bennetts Hill before it closes on December 29.

An emergency services staffer said: ‘We were told by the police they are there to prevent terrorist attacks’.

Meanwhile, in Newcastle-upon Tyne, a photo of young children alongside two burly armed officers sparked a furore after it was shared on social media.

It was one of a number from the market in Newcastle shared by Northumbria Police on its Facebook and Twitter pages, provoking thousands of responses.

Nic King wrote on Facebook: ‘I don’t want to see guns the size of my child when Christmas shopping and these images have put me off going into Newcastle.’

Lily O’Keeffe said: ‘If armed police are needed… they should be in surveillance vans, not patrolling the street.’

Northumbria Police said it understood the concerns but insisted the armed officers were there to reassure the public rather than because of any specific threat.

The moves in Birmingham and Newcastle follow a rash of global atrocities involving car or truck bombs.

‘This means the entire continent is vulnerable to attack, as we have seen in France, Germany and Belgium, but particularly in the run-up to Christmas.

‘It is a Christian period of festivities, bringing together large crowds of soft target civilians, and will attract attention from those who wish to inflict harm.’

The threat level to Britain for international terrorism has been at ‘severe’ since 2014, meaning that an attack is ‘highly likely,’ although no known plot is underway.

American State Department officials have warned US travellers to be vigilant when travelling to Europe – and to be particularly careful when going to Christmas events.

‘As part of this, a number of security measures were agreed before the market opened, including installing some concrete bollards at a number of locations.’

Superintendent Andy Parsons added: ‘The installation of the bollards formed part of the original security plan and is not a result of any new or specific intelligence.

‘It is a busy time of year for the city and we want to ensure a safe and enjoyable time for everyone who visits over the festive period.

‘Police will be working closely with market security staff to share information on a daily basis and to reassure people that there is an adequate police response available if needed.

‘Our policing tactics and security measures are constantly reviewed and we, along with our partners, are working around the clock to keep our cities as safe as can be.’