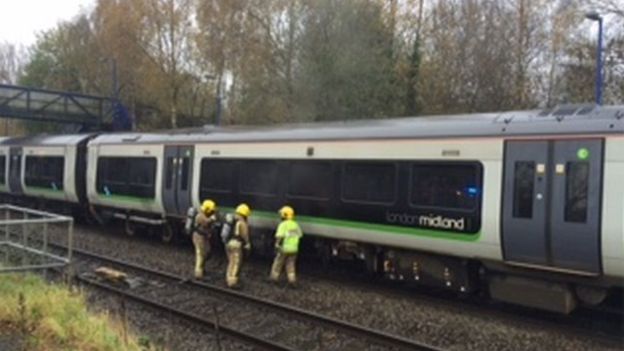 Up to 200 rail passengers were evacuated and thousands faced continued delays after a fire on a commuter train.

Smoke was reported to be coming from the 07:47 GMT London Midland service from Leamington Spa as it passed through Lapworth, Warwickshire.

Warwickshire Fire Service said the fire was in the wheels at the front of the five-carriage train.

Evacuated passengers were taken to a sports hall at a nearby primary school.

The train was heading to Birmingham Moor Street before continuing to Worcester Shrub Hill.

The lines have since reopened and delays, which lasted until early afternoon, have cleared.

Chiltern Railways and London Midland services are replaced by buses between Dorridge and Leamington Spa, while CrossCountry services are diverted via Coventry.

Lionel Deely was on the platform when the train arrived at Lapworth.

He said: “I was on the platform watching the train. When it came in there was flames and smoke coming from it.

“I shouted to the people on the train and was pointing to the fire. Some bloke must have gone to tell the driver.”

Commuter Anna Dee tweeted she was thankful to Lapworth School for opening its school hall for passengers to sit in while they waited for coaches to let them continue their journey.