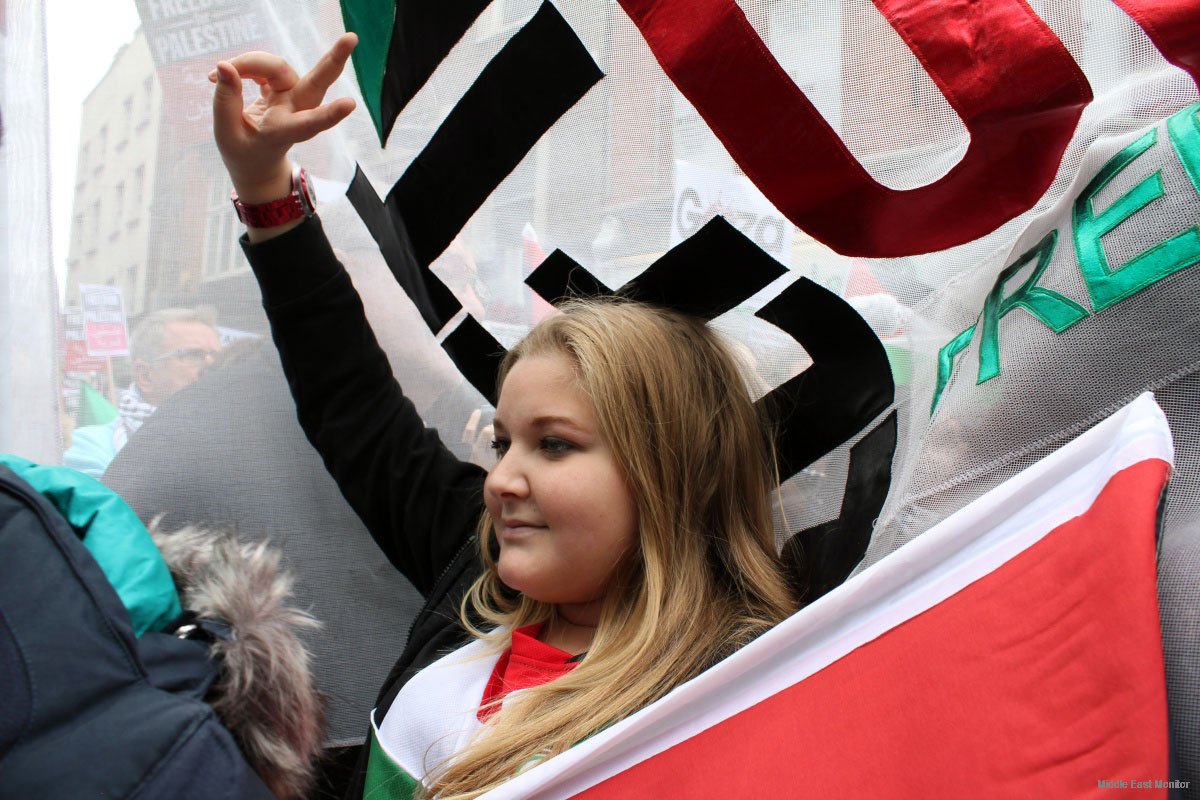 Thousands of protesters rallied outside the Israeli embassy in London on Saturday in protest of the decades-long Israeli occupation of Palestine and in solidarity with the current wave of popular resistance in the Palestinian Territories, dubbed by many as a Third Intifada.

The London demonstration, one of over 60 pro-Palestinian actions planned this week all over the world, was organised by the Palestine Solidarity Campaign, Friends of Al-Aqsa, Stop the War Coalition, Muslim Association of Britain, Palestinian Forum in Britain, and FOSIS.

The protests come amid reports of three more Palestinian youths shot dead, and following the Israeli government’s enforcement of a series of harsh policies in occupied East Jerusalem, condemned by Human Rights Watch as “a recipe for harassment and abuse”. This includes the lockdown of Jerusalem’s Old City and the demolition of the homes of any Palestinians suspected of involvement in violent attacks.

Among the host of speakers at the rally in London was former MP George Galloway. Condemning the “brutal” Israeli occupation of Palestine and the suffering endured by Palestinians living there as a result, Galloway stressed that Palestinians “have every legal and moral right to fight.” He continued to address the claim that this intifada stands in the way of a negotiated solution, slamming the imbalance in power between the two negotiating parties; “one party that has all the weapons and the support of governments worldwide, and another party that has only themselves and us on their side.”

Rafeef Ziadah, a Palestinian poet and performer best known for her poem “We teach Life, Sir”, was also among the speakers. “A lot of us are angry and I know that it is legitimate anger,” she said addressing the crowd, “but I also know that we now have the Boycott Divestment and Sanctions movement and we all need to act. It is not enough to be angry.” She added, “I am not even going to go the history of the Balfour declaration or British colonialism, but the current British governments has open arms trade with Israel. These are arms that have been tested on the bodies of Palestinians that your tax money is going into.”

The crowd of protesters chanted slogans of solidarity and support throughout the demonstration, carrying Palestinians flags and signs demanding an end to the occupation and calling for an independent Palestine. Faris Al-Mahjoub, a demonstrator, expressed his support for Palestinian resistance. “I think it will be extremely difficult to find a solution that keeps both sides happy, so we must keep pressing and we’ll find a middle ground eventually.”

“Netanyahu and his rightwing government have incited much of the recent eruption in violence we see today by overlooking settler terrorist attacks and expanding illegal Jewish settlements,” one protester told MEMO. Marcella Mameli-Badi, an Italian advocate for Palestine who was also protesting said she does not believe that there can be peace in the region without justice. “You have to return to the root cause, because nothing happens for no reason.”

“The success of today’s demonstration is a consequence of the brutal injustice faced by the Palestinians as a result of Israel’s inhumane actions.” Ziad Al-Aloul of the Palestinian Forum in Britain told MEMO, “It shows that Britain no longer believes the consistent lies of the media, and that the support towards the Palestinians is becoming increasingly stronger.“

Is this the Third Intifada?

Rising tensions in the Occupied Territories have led to dozens of deaths and hundreds of clashes.
Are we witnessing the Third Intifada?

The death toll now stands at 7 Israelis and over 40 Palestinians killed across the Gaza Strip, the West Bank and East Jerusalem since the beginning of the October.

At the heart of the heightened tensions lies the question of sovereignty over Al-Haram Al-Sharif, referred to by Jewish Israelis as the Temple Mount, which houses the Al-Aqsa Mosque. Israeli Prime Minister Benjamin Netanyahu has been accused of failing to maintain the status quo at the Temple Mount, igniting the anger of Palestinian Jerusalemites. While Israeli police have been preventing Muslim men from entering the Al-Aqsa Mosque to pray in recent weeks, particularly during Jewish religious holidays, Israeli forces conduct regular raids citing the need to protect Jewish sightseers.

However, the demonstrators today iterated that the continuation of the Israeli occupation, the “discriminatory” policies of Israel in the treatment of Palestinians, the siege of Gaza, as well as the expansion of illegal settlements in the West Bank remain to be the backbone of Palestinian mass uprisings.