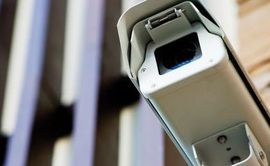 Protesters demonstrating in support of migrants and refugees have been ejected from St Pancras Station in London, according to the Metropolitan Police.

Disorder broke out on Saturday after demonstrators broke through a police line and entered the Eurostar terminal at about 18:00 BST.

Smoke bombs were thrown before protestors were “swiftly ejected” from the building, a Met spokesman said.

British Transport Police (BTP) said a man and a woman were arrested.

A post on the website of a group called Calais Migrant Solidarity suggest it had organised the protest in “solidarity with the Calais migrants”.

BTP, which jointly policed the protest with the Met, said its officers were facilitating a peaceful protest when “a number of other individuals arrived at the station causing disorder, and missiles, including smoke bombs were thrown at police officers”.

“This group were dispersed by police,” it said.