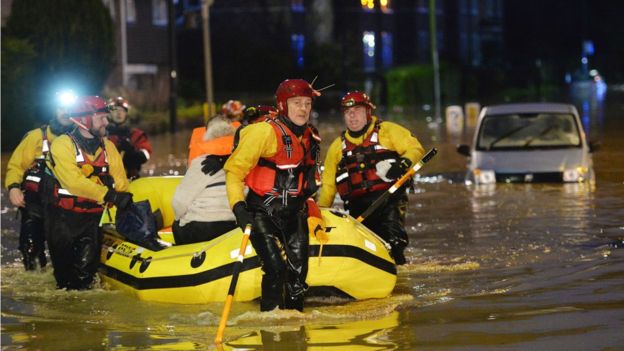 Emergency teams are working to evacuate people from homes in York, as flooding continues to hit northern England.

Police advised between 300 and 400 people to evacuate near the River Ouse and River Foss in York, with up to 3,500 properties at risk.

Hundreds of flood alerts and warnings are in place for England, Wales and Scotland, including more than 20 severe warnings – indicating danger to life.

After chairing an emergency conference call, the prime minister said the situation for many was “incredibly serious”.

“The level of the rivers plus the level of rainfall has created an unprecedented effect, and so some very serious flooding,” he said.

“We will do everything we can to help people in this, their hour of need,” added Mr Cameron, who is expected to visit some of the flood-affected areas on Monday.

More than 7,500 customers in Greater Manchester and Lancashire remain without power, Electricity North West said, including 5,500 homes and businesses in Rochdale.

Officials said pumps at the Foss Barrier – where the River Foss joins the River Ouse – had been overwhelmed and flood barriers had to be lifted, meaning areas in York that would usually be protected were now vulnerable to flooding.

York City Council said the River Ouse was expected to peak at more than 5m – close to to its highest recorded level of 5.40m.

The Environment Agency said the River Ouse’s water level had reached 4.65m at 04:00 GMT on Sunday. Its typical level is between 0.5m and 1.9m.

Resident Brian Marshall said flood waters in Hebden Bridge, West Yorkshire, had been running with such force on Saturday night that sandbags had been “ripped up”.

He said: “It was just impossible to do anything.”

Lt Col Hamish Cormack, from the Duke of Lancaster Regiment, said levels in York were still rising – saying “we’ve not probably seen the worst of it yet”.

Meanwhile, Nigel Evans, the Conservative MP for Ribble Valley, called on the government to release funds immediately to help those affected.

She said it was “right to say” flood defences had been “overwhelmed”.

She warned some rivers had not yet reached their expected high peak, saying the Army had been deployed in York, Leeds, and parts of Lancashire.