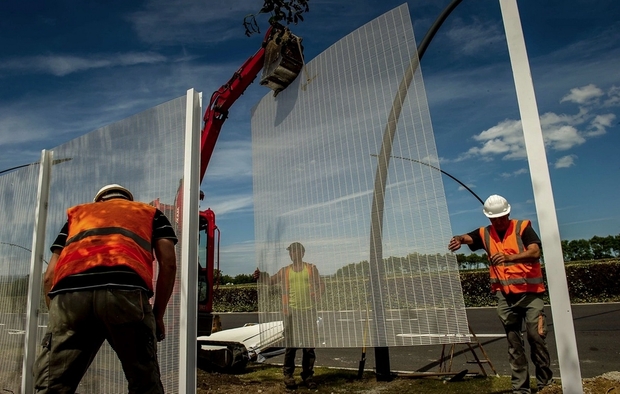 Deal for UK to pay private security staff stationed in France 365 days a year is part of ‘externalisation’ of border, experts say

The UK is for the first time offering private companies a $105m contract to secure its border in the French port towns of Calais and Dunkirk amid what experts say is a growing trend towards “externalising” the UK border.

The contract will, for the first time, privatise border-control work that has until now been carried out by staff at the UK Home Office Border Force.

The contract represents the biggest ever British investment in private security at the ports,according to the Calais Research Network, a group set up to examine border security there.

The four-year contract offer – which despite the UK’s recent vote to leave the EU was posted on the union’s dedicated tenders website – expired on 18 August.

However, a Home Office official told Middle East Eye that the winning tender will not be announced until December.

The UK government is using laws that came into force at least a decade ago to permit private security firms to search vehicles at the ports and detain people suspected of trying to cross without the necessary documents.

The tender notes that a 2006 law allows for “the examination of vehicles by an agent appointed by the Crown”.

Further, it says, “arrangements made under the Immigration and Asylum Act of 1999 provide powers to agents appointed by the Crown to detain people seeking to evade the immigration control”.

Private security officials will be given powers to detain people for up to three hours “pending the arrival of a Border Force officer”.

The agreement will see a total of 40 people employed to work 24 hours a day, 365 days a year, securing the UK’s border from the French port towns.

The port of Calais especially has been at the centre of the Britain’s attempts to beef up its border with France.

Thousands of refugees and displaced people – many of them from conflict zones in Somalia and Eritrea but also including unaccompanied minors from Syria trying to reach relatives in Britain – are living in squalid camps on the outskirts of the town in hope of attempting a risky journey to the UK, often by clinging to the underside of lorries.

The French and UK governments have come under pressure to combat the ongoing attempts by camp residents to break into vehicles that are travelling to the UK, or even to walk through the 50.5km underwater tunnel that links France and Britain.

News of the giant security contract came to light days after the announcement last week that the UK is paying French companies a reported $2.5m to build a mile-long concrete wall in Calais.

Experts say that while the new wall is part of a growing number of border fortifications in Europe, its position so far from the physical external border of the United Kingdom is significant.

“When the Berlin Wall went down at the end of the 1990s there were only 11 border walls in the world – and none in Europe,” says Elisabeth Vallet, a professor of geography at the University of Quebec and a specialist in border security techniques.

“Now you have many migratory walls – or reinforced fences – along the borders of Bulgaria, Greece, Hungary, Austria, Slovenia and Macedonia. Norway has announced the beefing up of its border fence with Russia. And now the UK has just done the same thing with Calais.

“That this wall is being built outside of the UK is noteworthy,” she said.

“However, it reflects a trend towards the externalisation of borders, where the border gets thicker and is dealt with further and further from the actual border line.”