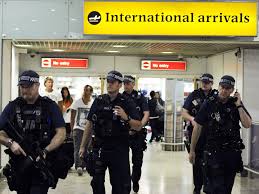 Haroon Ahmed, 26, has been on the run since fleeing from HMP Dovegate, near Marchington, Staffordshire, on Wednesday afternoon.

Police have launched a manhunt for the violent robber but the Sunday Mirror said he had fled to Marbella on the Costa del Sol.

Ahmed told the newspaper: ”In my own mind I wanted to test out the security. I thought I’ll give it a go – and walked out of the door. That’s how easy it was. I just kept on walking.”

He added that he was worried for his safety if he returns to the UK and claimed his family was being harassed because of his escape.

The Sunday Mirror said it had informed police of Ahmed’s whereabouts and the information had been handed to investigating officers.

Staffordshire Police had previously said they were ”investigating all lines of inquiry” amid reports he fled abroad.

A force spokeswoman said: ”We are actively investigating all lines of inquiry at the moment. We cannot confirm or deny that he has fled to Spain.”

Ahmed, who is from the Derby area, is described as Asian, 6ft tall with a thin build and short black hair in a crew cut.

He was wearing jeans and a grey t-shirt but police say it is likely he has changed his clothing.

He has been missing since around 4.15pm on Wednesday, Staffordshire Police said.

Due to his violent conviction police advise members of the public not to approach him and instead ring 999.

Officers involved in the search arrested his brother, Majeed Ahmed, 25, of Clarence Road, Derby, on Thursday, and have charged him with assisting a prisoner in escaping from prison.

He has been released on bail to appear before magistrates in Burton on June 25.

And a black Volkswagen Golf has been subjected to a detailed forensic examination as part of the investigation.

The force is asking anyone who knows where Ahmed is to contact Staffordshire Police on 101.