Posted at 08:36h in Security by riasca 0 Comments
0 Likes
Share

Shamima Begum, 15, Kadiza Sultana, 16, and an unnamed 15-year-old friend, flew from Gatwick to Turkey on Tuesday.

Police, who interviewed the girls after another girl from their school went to Syria in December, said the development had come as a “great surprise”.

They said nothing at the time had indicated the three girls were at risk.

Cameron: “Our authorities will do everything they can to help these girls”

Mr Cameron said: “It is deeply concerning and obviously our authorities will do everything we can to help these girls.

“But it does make a broader point which is the fight against Islamist extremist terror is not just one that we can wage by the police and border control.

“It needs every school, every university, every college, every community to recognise they have a role to play.

“We all have a role to play in stopping people from having their minds poisoned by this appalling death cult.”

The Metropolitan Police said they had been spoken to the three girls that month as part of the inquiry into the other girl’s disappearance.

The force said: “There was nothing to suggest at the time that the girls themselves were at risk and indeed their disappearance has come as a great surprise, not least to their own families.”

The three girls they told their parents on Tuesday they were going out for the day, police said. 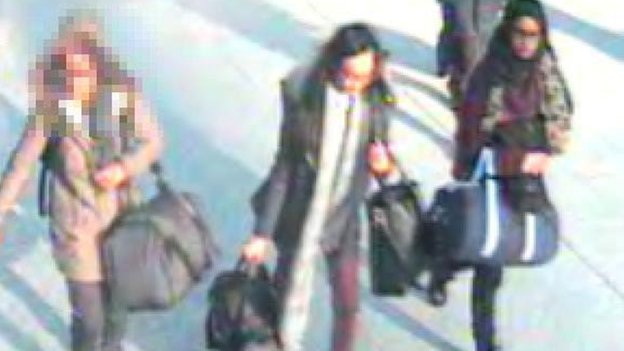 CCTV at Gatwick airport captured the girls as they passed through security, before boarding a Turkish Airlines flight to Istanbul.

Shamima is possibly travelling under the name of her 17-year-old sister Aklima Begum, police said. The third girl is not being named at the request of her family.

Worshippers at the East London Mosque were asked during Friday night prayers to come forward if they had any information to help the girls return home safely.

Mosque spokesman Salman Farsi said the trio, who have been described as “straight-A students”, had been manipulated.

He said: “They have been misled. I do not know what was promised to them. If they do go to Syria, it is a war zone and there are serious ramifications for going in to a war zone.”

Dr Muhammad Abdul Bari, a trustee of the mosque, told the BBC: “Our understanding is the family didn’t have any idea and the children didn’t leave any clues and even the school, which is quite a good school in this borough, they don’t have any clue as to why these three girls just suddenly left.

“They might have some other friends and people don’t know whether they were radicalised online or by some individuals physically.

“It’s a mystery for the community.” 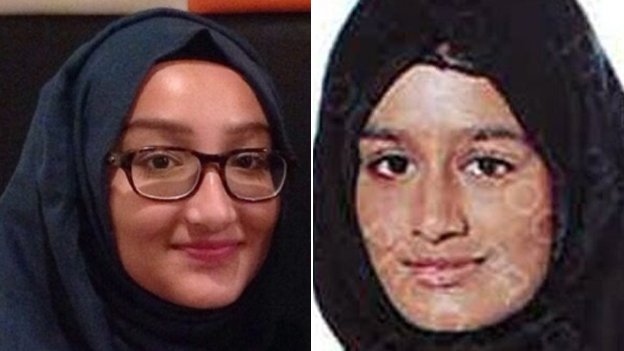 Police have issued a description of the three girls:

Rushanara Ali, MP for Bethnal Green and Bow, said there was “deep concern” and shock in the close-knit community.

Speaking on BBC Radio 4’s Today programme about the possibility they were heading to Syria, she said: “We all of us hope that’s not the case, but they left home without informing their families, left the country, which is extremely out of character so these are our worst fears.”

Mussurut Zia, general secretary of the Muslim Women’s Network, told BBC Breakfast: “I don’t think for one instant that these people, Isis [Islamic State or IS] and their likes, are going to treat these girls in the right way.

“They won’t have rights, they won’t be equal to their male counterparts and I don’t think that they know this at the moment and they’re going to be in for a real shock.”

She called for more training for airport staff to ask questions of those flying to border countries such as Turkey and raised the possibility of parental consent to be given when teenagers were travelling abroad alone.

Cmdr Richard Walton: “The girls will be in grave danger in Syria”

Metropolitan Police Commander Richard Walton said he believed the girls would be “in grave danger” if they made it to Syria.

He said he hoped they would “hear our concerns for their safety and have the courage to return now, back to their families who are so worried about them”.

Police hope the girls may still be in Turkey, as severe winter weather is currently affecting transport links in the country.

Abdul Samid, a parent governor at Bethnal Green Academy, said there was “absolutely not” any radicalisation at the school.

“I’m 100% confident – with the head and the senior leadership team and the whole school – that we’ve done everything to put in measures that safeguard all the children that attend the school,” he said.

Shadow home secretary Yvette Cooper said: “The idea of 15-year-old British schoolgirls setting off to Syria is very disturbing, and shows that more action is urgently needed to stop young people being drawn into extremism and conflict.”

Those with information can call the free Anti-Terrorist Hotline number on 0800 789 321.