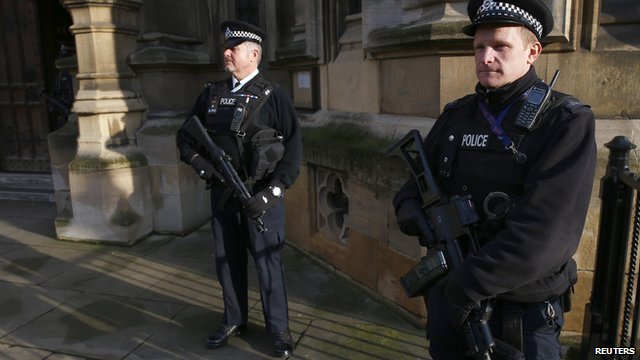 The UK terror threat level was only made public for the first time in the wake of the July 7 attacks in London in 2005.

There are five different terrorism threat levels which indicate the likelihood of a terrorist attack in the UK.

The different levels are:

Low – an attack is unlikely

Moderate – an attack is possible but not likely

Substantial – an attack is a strong possibility

Severe – an attack is highly likely

Critical – an attack is expected imminently

Brought in by security chiefs in August 2006, the warning system was part of Britain’s new counter-terrorism strategy.

It came a year after the July 7 bombings, in which 52 people were killed and more than 700 injured in coordinated bomb blasts on the Tube and a bus in London.

When they were first published on August 1 2006 the threat stood at severe – the second highest level.

But just over a week later, on August 10, the threat was raised to critical after police exposed a plot to manufacture and smuggle parts of explosives on to passenger jets flying between the UK and the US, and detonate them on board.

Counter terrorism police smashed the terror ring, arresting its members in a raid code-named Operation Overt, and on August 13 the threat level was lowered to severe, where it stayed for around a year.

Britain was plunged into a fresh state of heightened alert and the terror threat was raised to critical on June 30 2007 after a blazing car loaded with propane canisters was driven into a crowded Glasgow Airport.

The attack came just one day after two bombs were discovered in cars in London’s Park Lane and Piccadilly – among the capital’s busiest tourist spots.

Police quickly arrested Muslim extremist Bilal Abdullah, a man behind the two attempted attacks. And on July 4 2007 the threat level was lowered to severe, where it stood for two years before being lowered again on July 20 2009 to substantial.

But the perils of terrorism came to the forefront again when on Christmas Day 2009 the now-notorious underwear bomber Umar Farouk Abdulmutallab tried to blow up a jumbo jet as it flew to Detroit in the US.

Tragedy was only averted when brave passengers overpowered the Nigerian, and terror chiefs decided to raise the British threat level on January 22 2010 to severe.

It stood at severe for 18 months before being lowered on July 11 2011 to substantial, where it stood for three years.

Home Secretary Teresa May announced the terror threat was again being raised to severe in August last year in the wake of warnings of the deadly threat posed by British jihadists radicalised fighting for Islamic State extremists in Syria and Iraq.

The level is set by the Joint Terrorism Analysis Centre and the Security Service, which operates out of MI5. It is independent of ministers and assesses a range of factors before deciding on the threat level.