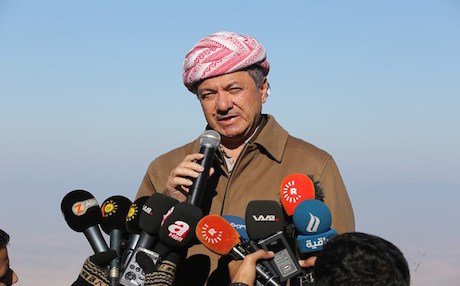 ERBIL, Kurdistan Region—The Kurdish President Masoud Barzani said he was disappointed that the Kurdistan Region was not invited to the anti-ISIS coalition conference in London where on Thursday world leaders pledged to defeat the Islamic State (ISIS).

“I express my and Kurdistan people’s disappointment with the organizers of this conference and it is unfortunate that the people of Kurdistan do the sacrifice and the credit goes to others,” said Kurdistan Region President Masoud Barzani in a statement.

Leaders of 21 coalition states gathered in London to stress their commitment against ISIS and the impact coalition air strikes have made against the radical group.

Barzani said that Kurdistan was leading the war against ISIS and it deserved to be present in such meetings.

“The people of Kurdistan bear the brunt of this situation and no country or party can represent or truly convey their voice in international gatherings,” he said.

The Kurdish president said that the Peshmerga “are the most effective force countering global terrorism today,”

Iraqi Prime Minister Haider al-Abadi was at the conference where he told the coalition leaders that the Iraqi army need more weapons in its fight against ISIS.

US Secretary of State John Kerry said that air strikes had killed about half of the ISIS leaders in the last five months.