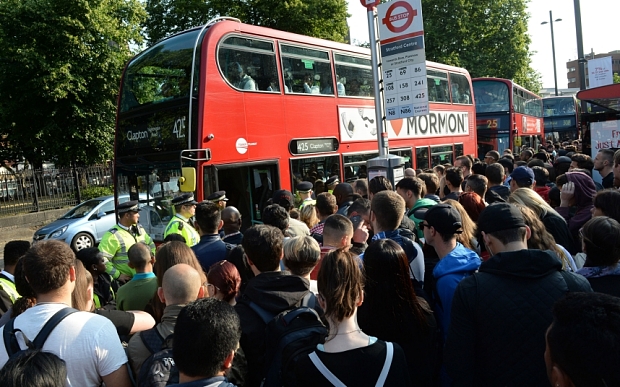 Tube strike to bring London Underground to standstill today – how will it affect me?

A 24-hour Tube strike will bring London commuters and tourists another bout of travel chaos after unions announced it will go ahead on today.

Thousands of London Undergound workers are set to walk out from 6.30pm today in a bitter ongoing row over plans for all-night service on five lines.

The planned strike action will cripple the capital’s Tube network for the second time in a month after the first London-wide shutdown in 13 years in July.

Members from the Aslef, RMT, TSSA and Unite unions are due to take part in the industrial action, despite last-ditch attempts on Monday to halt the strike.

The drivers’ union Aslef accused London Underground (LU) of being “completely inflexible” over terms and conditions for the Night Tube, leaving it with “no other choice” than to press ahead with the walkout.

‘We genuinely regret the disruption this will cause, but the blame for this must rest with the pig-headed determination of the mayor…’
– Aslef officer Finn Brennan

The union said the company should postpone the planned launch of the round-the-clock service on September 12 so that further negotiations could be held.

Aslef officer Finn Brennan said: “This leaves us with no other choice than to go ahead with strike action from 9.30pm on Wednesday.

“We genuinely regret the disruption this will cause, but the blame for this must rest with the pig-headed determination of the mayor to insist on a September 12 launch of Night Tube instead of allowing more time for a negotiated settlement to be reached.”

Other union members are due to strike from 6.30pm, meaning that disruption will start late in the afternoon as workers try to get home to beat the action.

Transport for London said Tube services will stop running at 6.30pm today – and urged people to complete journeys by this time and travel earlier if possible.

Tube services are expected to be “exceptionally busy” between 4.30pm and 6.30pm, it said.

There will be no Tube services all day on Thursday. Extra bus and river services will run, while all other public transport services and roads will be much busier than usual.

The route for London’s new Night Tube (Transport for London)

LU said the unions were continuing to demand more money, the hiring of more staff – including for ticket offices that customers no longer use – and further guarantees on what they consider to be issues around work-life balance, including a 32-hour, four-day week.

Chief operating officer Steve Griffiths said: “After listening to the unions, we put forward an extremely fair revised offer, which addresses their concerns over work life balance and rewards our people for the hard work they do in keeping London working and growing.

“Despite this, the new offer has been rejected outright by the union leadership, again without consulting their members.

“We continue to urge them to put the new offer to their members and not subject Londoners to further unnecessary disruption. We remain available for talks at any time.”

A spokesman for Acas, the arbitration body, said on Monday: “Talks at Acas adjourned today without reaching any agreement on the pay and night Tube dispute.

“The parties have agreed to return to Acas for more talks on these issues and we are in the process of making arrangements, although any meetings are unlikely to take place until next week.

“A separate but related stream of talks on Fit For Future Stations will take place tomorrow.”

When will the Tube strike start?

Tube services stop running from 6:30pm on Wednesday, August 5, with trains expected to be “exceptionally busy” from 4.30pm according to TfL. It advises completing your journey by 6.30pm and travelling even earlier if possible.

There will be no Tubes on Thursday, August 6 but normal services are expected to resume on Friday.

How do I get around during the strike?

While the Tube’s network covers much of London there are other services still running which commuters might want to consider in their time of need.

The Docklands Light Railway, London Overground, tram and TfL Rail services, as well as other overland rail services, will all be running as normal. They are however likely to be much busier than usual.

Other alternatives include taking a bus, cycling or walking.

The latest information on TfL services will be available @TfLTravelAlertson Twitter during the strike.

You can also use its Route Planner app and online service in order to see how long various options take – even if you are planning to walk it.

TfL suggests services will be busier than usual, especially where stations connect with the Underground.

Stations with Tube and Overground interchanges such as Shadwell, Stratford and Canary Wharf, will be busy while the entry and exit to the DLR at Bank will be through Monument station only.

All scheduled services on National Rail will be running as usual for the most part except for those operated by Chiltern Railways. If travelling on Wednesday afternoon and at peak hours on Thursday however, TfL is advising those with a flexible ticket to change their journey times in order to ease congestion.

TfL says an 250 extra buses will be on the roads during the strike, but passengers are asked to be patient

Will London buses be running?

TfL has committed to putting 250 extra buses on the roads of the capital during the strike. It will also deploy extra staff at Tube and bus stations to direct travellers onto alternative routes.

Travellers are reminded that buses no longer accept or carry cash. You can pay by a contactless debit card or with an Oyster card.

Here is a TfL bus map to help you plan a route home by bus.

A peak time service will be running throughout the strike.

Will my Tube ticket be accepted on other routes?

TfL has the following information on tickets:

• Travelcards will be accepted within the zones purchased as usual

• Travelcards will be accepted on the Emirates Air Line

What do drivers need to know?

The congestion charge will remain in place. Expect congestion.

Some coach routes travel from one side of London to the other and so might be useful. TfL had the following advice:

Taxis like buses will get stuck in all the extra traffic

Are also likely to get stuck in traffic. Queues at ranks will be policed by TfL “marshalls”.

Hubs will be restocked more frequently plus there will be new hubs in place at:

Those planning to walk are advised to download and print off a map of the city first.

Staff on the bus network, DLR, London Overground, tram and TfL Rail services will not be on strike, but these services are expected to be much busier than usual.