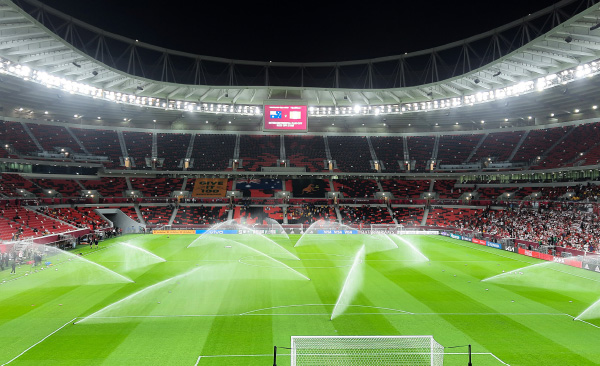 09 Nov An alliance of style and safety

Qatar is set to become the first Middle Eastern country to host the Men’s FIFA World Cup, as hundreds of thousands, if not millions, of football supporters from across the globe are set to descend upon the country in November and December 2022. Much has been said about the stadia and their provisions for the players and supporters, but what else has been put in place to ensure the safety of all in the case of a fire?

The opening match on the 20th November will be held at the Al Bayt Stadium between the host nation and Ecuador. There are seven new stadia that have been built especially for the event, including the Ras Abu Aboud Stadium AKA: Stadium 974 – a 40,000 capacity temporary waterfront stadium, incorporating 974 shipping containers – the significance of 974 being that this is the country’s international dialling code. The Ahmed Bin Ali Stadium in Al Rayyan which is only expected to host 6 matches in the tournament, sits on the site of a former arena – more than 80% of which was recycled to construct the new stadium. The eighth stadium used in the contest is the refurbished Kalifa International Stadium in Doha, which originally opened as Qatar’s principal football stadium in 1976 to serve as the flagship venue for the 1976 Gulf Cup.

FIFA has very stringent Stadium Safety and Security Regulations, which indicate that the host nation’s fire safety legislation shall be referred to and adhered to within all stadia, and gives guidance on high-risk areas (such as; catering facilities, boiler rooms, oil stores, general stores and enclosed car parks), evacuation, warning and detection, and firefighting facilities. But with so many different styles of architecture over the sites, and so many different legacy visions, different principles had to be applied to different stadia.

All in all, the original firefighting specifications in the Prior Information Notice sent out by the Supreme Committee for Delivery and Legacy seem to have been surpassed. The Supreme committee approached the building of all the stadia as one project, and had expected to need over 512,000 meters of pipework to feed 2,480 fire hoses and 152,000 sprinkler heads, along with another 400 firefighting and suppression systems. Approximately 200 fire alarm panels were needed, as well as 5,600 alarm beacons, 8,800 heat and smoke detectors and 3,200 call points. As the project progressed and was divided up between contractors, each stadium needed to continue to meet the country’s fire regulations, but how that was achieved developed along with the individual designs of the new venues.

Looking at the design of Stadium 974 which will be dismantled for use elsewhere after the tournament, the shipping containers have been ingeniously used around the outside of the structure at all levels to provide spaces for toilets, concessions, kitchens, and other facilities. This means that the areas classed as “high risk” are naturally contained within their own partition of the building. Additionally, these containers have been lined with 16mm thick type X gypsum, which normally provides a fire rating of one hour. However, a fire rating of two hours was the contractor’s target. This has been accomplished by using Fire Barrier Paint by FlameOFF – an intumescent paint which expands in extreme heat, giving extra insulation to the drylined walls. The fire barrier paint is certified to ASTM E119/UL 263, providing two hours of protection for drywall. Also, it is tested to ASTM E84/UL 723, & NFPA 251 with Class “A” flame spread. This would allow for containment for the fire within its shipping container once a fire shutter had been closed, which could then be brought under control and extinguished with a variety of internally situated fire suppression products, or with an external system specifically designed for shipping container fires such as Hydropen. The technical delivery of the fire safety standard in this temporary structure was a mammoth challenge, and the main contractors HBK Contracting Company, reached out to Jensen Hughes to assist with complicated fire engineering consultations and technical support.

The Al Bayt Stadium will host the opening match of the tournament, and has been built by Webuild S.p.A. FirePro was contracted to install their extinguishing systems with their primary focus areas being electrical rooms, switchgear and battery rooms, as a fire incident in any of these areas can have catastrophic consequences especially during live events where spectators are present. The system works by triggering a high-pressured aerosol released powder into the affected area, and can work on class A, B, C and F fires. The modularity and compactness makes them ideal for the protection of electrical equipment. The systems are installed easily and quickly in these spaces – able to automatically protect without being pressurised. The product was specifically chosen due to its environmentally friendly composition, which will not leave environmentally hazardous substances behind to contaminate the site, which enhanced Al-Bayt’s environmental protection credentials. Fifty-two Flameshield Industrial Fire Shutters – some up to 9.2m wide – have been installed in the stadium to protect areas should a fire break out. These were installed by The A1S Group working with their Middle Eastern partners Al Thuraya. Fire alarm. Other firefighting systems have been installed by CESCO, which have also installed fire alarm systems at the Al Janoub and Kalifa International Stadia.

The Kalifa International Stadium refurbishment has seen the stadium almost completely stripped back and has cost almost as much as the new builds of some of the smaller stadia. It is the only stadium not to be partially or fully dismantled after the tournament. It is also home to the Command Centre for the World Cup, where safety and security for all eight stadia is managed. The centre allows the hosts to manage risks in real time, with eyes on all areas allowing crowd management for emergency evacuation, as well as being able to track the progress of a fire should it occur in one of the stadia and allow for real time monitoring to assist the authorities in bringing the fire under control and extinguishing it. The AV system in this stadium also works in synchronicity with the CESCO fire alarm system, providing a priority input for an emergency voice-evacuation message to be triggered in the event of an emergency.

Al Janoub Stadium has incorporated WinDuct into its firefighting systems, which sees a fire rated ducting system specifically designed to evacuate smoke and maintain the systems integrity for two hours within a fire compartment, enabling the maximum amount of smoke to be extracted throughout the fire period. The roof structure, which comprises 185 metre propped arches underwent construction staging design, fire engineering and plate design for the sculpted V columns supporting the primary arches.

Al Thumama Stadium along with Al Jaoub stadia has seen the installation of 3M’s Novec 1230 fire suppression systems, a waterless system which is stored as a liquid and discharged as a gas and provides the highest margin of safety for human occupancy. The fluid is another product which helps with the green credentials of these stadia, as it boasts the one of the highest environmental profiles of synthetic clean agents available on the market today.

Education City Stadium’s fire safety features were provided by Arup, and is among the world’s most environmentally sustainable stadiums. This stadium also uses 3M’s Novec 1230 fire suppression systems, this time supplied by QIBS. Thanks to the sustainability targets set by the Supreme Committee for Delivery and Legacy, fire safety systems have been procured not just on their efficacy, but on their green credentials too. With so many toxic chemicals historically being used in firefighting, the use of these systems not only support the credentials of Qatar’s sustainable vision for the tournament, but also a greener future for the area’s firefighting industry.

The final stadium, Lusail Stadium, nine miles north of Doha is the centre piece of the FIFA 2022 World Cup. The design reflects the hand-crafted bowls found all across the Arab and Islamic world during the rise of civilisation, while interplays of light mirror the Fanar lanterns of the region. With the passing of time, the golden exterior will fade replicating aged metal handicrafts to create a venue alive with cultural character.

There has been an extensive Evacuation Modelling and Crowd Management consultation by JVVA Fire & Risk, to augment its fire protection systems. With similar consultation being undertaken during the design phase of all the stadia by various contractors. JVVA used computer simulations of crowd movement in the complex space of the stadium, which was taken into consideration during the design phase, ensuring the safe evacuation of its 80,000 football supporters. The stadium will host the final of the tournament in December.

With over a million spectators expected to visit over the month the tournament is on, Qatar can expect a very busy end to 2022, but they have done all they can to ensure that the FIFA world cup has an enduring legacy, not just with sustainability, but with fire safety too.

In late September, FIFA launched its Safety & Security Learning platform to assist in its endeavours to make football stadia safe and welcoming for everyone. FIFA acknowledges that its responsibility is not only to set the requirements and standards that must be met with regard to safety and security at FIFA tournaments and events, but also to provide support and expert advice on safety, security and service-related matters to host countries, confederations and member associations.

The platform aims to provide safety and security professionals with essential knowledge, guidance and additional resources to support their role. Users will be able to implement positive changes to working practices, which will improve stadium safety and security and the experience of everyone attending football matches.

Embedded in this is FIFA’s philosophy that safety and security should always be delivered with a customer service ethos. The platform features five exclusive stadium safety and security learning modules (Risk Assessment, Crowd Management, Contingency and Emergency Planning, Stewarding and Stadium Safe Capacity) with content being updated continuously.

Access to the platform is free but restricted to safety and security professionals who are nominated through those responsible for security within their confederation or member association.

Learners will be able to implement positive changes to working practices, which will improve stadium safety and security and the experience of everyone attending football matches. Embedded in this is FIFA’s philosophy that safety and security should always be delivered with a customer service ethos.